The Color and Flavor of Afro-Cuban Life: . .

By ADTourism January 7, 2019 No Comments 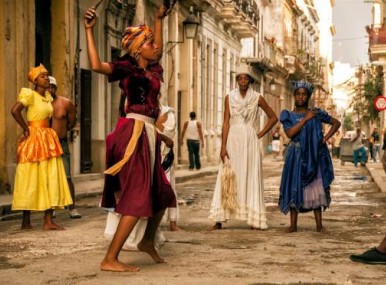 Thanks to Dr. Dionne Mahaffey for this article in the Atlanta Black Star.

The Color and Flavor of Afro-Cuban Life: A Look at How Black Cubans Have Struggled Over the Years with Racial Identity and Culture

Afro-Cubans have contributed greatly to the culture of Cuba with Havana having the highest concentration of Afro-Cubans in the country. However, there is great controversy about how many people of African descent there are in Cuba—some say 20 percent, while others say upwards of 65 percent. Many people of mixed race describe themselves as mulatto or mestizo, people of combined European and Latin/African backgrounds.

Although some don’t identify with the Afro-Cuban label, preferring to identify through nationality as Cubans more than by race, Blacks in Cuba struggle with racial issues and identity in much the same way as the rest of the world, with historical inequalities carrying over to modern times.

The first group of Afro-Cubans are the descendants of enslaved Africans brought from West Africa. In recent years, the country has also seen an increase of Black immigrants from Jamaica and Haiti, adding to the African flavor of the island. Despite the numbers, people of African descent are often excluded.

“We’ve seen a lot of changes and improvement in the way that Blacks are treated in Cuba since the Revolution,” says Aileen Badell, a retired journalist who worked for the Cuban Institute of Radio and Television for 18 years. “We still have a ways to go but there are black doctors, teachers, journalists, engineers and other professionals.”from the very lucrative tourism industry, where workers can earn better wages due to tips. They are also overlooked for managerial positions and other better paying jobs while being relegated to less desirable housing and neighborhoods.

In the 1960s, Castro issued anti-discrimination laws meant to deal with the economic disparity between Black and white Cubans, along with a massive literacy campaign. Two years later, he declared the Revolution’s victory over the “age of racism,” a claim which has since proven to be premature.

The government deals harshly with those who bring up issues of race.

“There is an unstated threat. Blacks in Cuba know that whenever you raise race in Cuba, you go to jail,” says Carlos Moore, who has written extensively on the issue.

During the 1920s and 1930s, Cuba experienced a movement known as Afrocubanismo, which brought Black culture to literature, poetry, painting and other arts. It highlighted the struggles of the Afro-Cuban people, dealing with independence from Spain, slavery and the adaptation of a Cuban identity.

Fernando Ortiz was a scholar who dedicated his life to learning about Cuban culture. Today, you can learn about him and his work at the Fernando Ortiz Foundation, which showcases much of his research documenting the unique culture of Afro-Cubans. The foundation is located in Havana and run as a not-for-profit center.Afro-Cubans have contributed greatly to the culture and arts scene in Cuba today. Many tributes to the history of Afro-Cubans can be found around Havana, as well as throughout Cuba. There are a number of attractions that show the modern Afro-Cuban movement, from jazz clubs to cultural events.

The Casa de Africa is a museum located in Old Havana which houses collections of artifacts and art. Collections are from 27 African countries, a combination of items from Fernando Ortiz and Fidel Castro. Many of the pieces are gifts sent to thank Cuba from the recipients of foreign aid programs. The Casa de Africa is an important center of study of Afro-Cuban Culture, boosted by the artifacts displayed.

Afro-Cuban religion is derived from the religious practices found in Africa and brought to Cuba by the enslaved Africans who were brought to the region. With many similarities to Voodoo, rituals can be bright and colorful, with dancing, chanting and drums. Many companies in Cuba offer a tour of Afro-Cuban religious sites and events in Havana, where participants can learn about these unique religions first hand. Many include visits to the homes of local devotees, along with an English speaking guide to interpret.

While Martin Luther King may be an American hero, his influence can be felt in Cuba, especially at the Centro Martin Luther King. The center promotes Christian social responsibility, providing a number of programs to help the less fortunate and educate the population. Health programs, education and social activism are the key focal points for the MLK Center.

The direct neighbor of the MLK Center is the Ebenezer Church, which promotes the values of equality and acceptance of all genders, races and orientations. The church is open and welcomes all to visit or to worship and can be found in Havana.

For an authentic taste of rumba, the fusion of Spanish and African musical styles, the Callejon de Hamel in Havana is an intense, colorful and crowded experience. Brilliant murals cover the walls, created by contemporary Afro-Cuban artist Salvador Gonzales Escalona. The site has become more popular with tourists over the years.

Every January 6 is Three Kings Day— the Epiphany—originally intended to celebrate the Three Wise Man who brought gifts to celebrate the birth of Jesus. Afro-Cubans have a long and complicated history with this holiday, using it as a way to celebrate their own saints with African drums and dancing. Historically, enslaved Africans would be dressed in finery and paraded through the streets of Havana, where whites would toss coins to them. The coins were saved in order to buy freedom. Today, Afro-Cubans have reclaimed this celebration, leading Cubans, regardless of race, in a bright, colorful parade.

Outside of Havana, the city of Matanzas is well known for its rich Afro-Cuban culture. Just 90 km east of Havana, Matanzas is known as both the “city of bridges” and as the Venice of Cuba, with 17 bridges crossing the many rivers that crisscross the city.

Santiago de Cuba also has a large Afro-Cuban population, and rich cultural history. It is the place to see son, the traditional dance from which salsa dancing is derived and guaguanco, dancing accompanied by drums. The city celebrates Carnival in July, with lots of congo music. It was the home of Antonio Maceo, a highly honored Cuban independence soldier who died in 1896.

While racial equality is still an ideal that many people in Cuba work towards, it is a goal that has yet to be reached. Afro-Cubans have contributed greatly to the history and culture of Cuba, from fighting in wars, to contributions in the arts and the political realm.

There are no shortage of Afro-Cuban sites to see in Cuba. Learning about the rich culture of Afro-Cubans is both easy and interesting in Cuba’s largest cities. There is something for everyone, from music and dance to museums and religious tours.