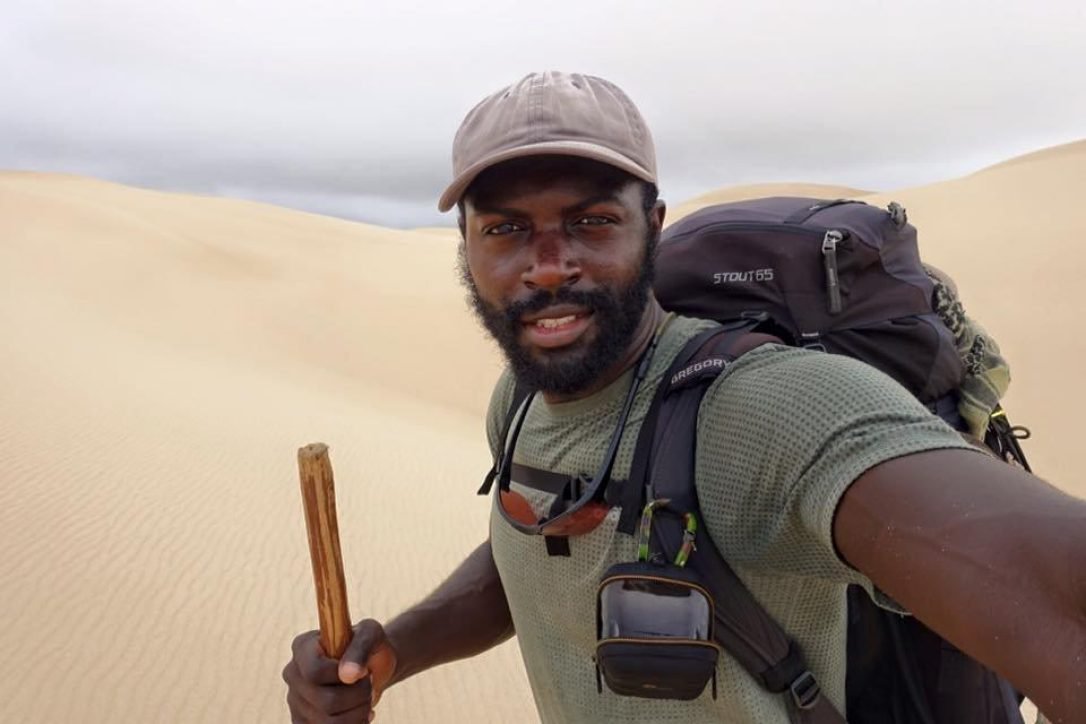 He contracted malaria, dodged bullets with government soldiers in a war zone and was jailed for several days near a small village because police didn’t believe him when he explained who he was.

Adventure traveller Mario Rigby also tested the limits of his physical and emotional stamina when he trekked 12,000 kilometres northward across eight African countries for two years, by foot and kayak. He started in late 2015 and finished in February, taking an eastern route from South Africa to Egypt.

Africa, he says is a place that has been depicted by the West only as dangerous, violent and beset by poverty. Rigby saw some of that downside while he was there; he isn’t sugar-coating his experience. But the incredible warmth and compassion from so many people he met left the biggest impression on him, he said in an interview after his return.

“Everywhere I went they take the time for you. They offer you tea and say ‘come sit down with us,’ or ‘come to my home, I want to introduce you to my family,’” he says.He later adds: “It’s almost like you have to fight them to not be so nice to you.” And so even though he faced some challenges, the Toronto resident fell in love with the continent and plans to return for another journey later this year, this time along the western side.

Rigby, 32, a personal and group fitness trainer in peak condition, flew from Pearson airport to Cape Town, South Africa, in late November 2015 to begin his voyage.

Among the items he packed were long-sleeved shirts, sturdy boots, malaria pills, bug spray and a tent. He also brought a video camera (later lost in a river) and an iPhone powered by a portable solar energy pack. He used the phone to record and document his journey and post stories and videos to his Instagram account and website.

He chose Africa, a place he’d never been, in part because as a Black person he wanted to inspire other Black people — particularly the young people on the continent — to “pick up and be brave,” and venture around the world.

He wants to break stereotypes that limit what he can aspire to and where he can go, he says.

One of Rigby’s heroes is Mike Horn, a Swiss explorer born in South Africa who gained fame for his 2002-2004 journey around the Arctic Circle by foot, boat, kayak and ski kite.

During the 20-hour-plus flight from Toronto to Amsterdam and finally Cape Town, Rigby was feeling extremely nervous about what he was getting into, he admits. “It was scary as hell,” he recalls. “It’s not like this is what people do normally. In my head there was so much doubt. I was asking myself: am I really doing this? This is crazy. My heart was beating, but it was mostly excitement. I became excited from fear.”

As for walking long distances, he’d completed a 550-kilometre journey from Toronto to Montreal in the fall of 2015. But by comparison, the African goal of 12,000 kilometres was more than 20 times that. Before heading out he spent a week in Cape Town just to get acclimatized to his new surroundings. He stayed with a family he’d connected with online before flying to Africa.

His plan was to take a train south from Cape Town to Cape Point, the extreme southwestern tip of Africa, and begin walking from there. His first travelling companion was a 19-year-old student from Zimbabwe who Rigby met in a Cape Town coffee shop. The student overheard Rigby talking about his plans and asked to tag along for the beginning.

From Cape Point they walked together 14 hours. The scenery and animals they encountered, including wild baboons, were “incredible,” Rigby says. The student departed the following day and returned to school, leaving Rigby to proceed on his own.

Several weeks and hundreds of kilometres later, Rigby was staying in a guest house operated by a husband and wife in Witsand, a coastal town in South Africa’s Western Cape. They treated him very well, but there were some troubling conversations.

The white man was a former member of the South African armed forces that fought against Black people during the  Apartheid regime, and he admitted to Rigby that he’d shot and killed “the Blacks” during his years of service.

During a barbecue, the man said he didn’t think he’d ever see the day he’d be sitting down with a Black person to share a meal. Rigby says he was disgusted by the man’s past, but “I felt like I had a humane responsibility to not just forgive him, but to try to understand him.”

Rigby spent the longest part of his journey in South Africa, walking 3,500 kilometres over about five months. His impression of the country, post-apartheid, is one where major racial and economic divides are still very apparent.Whites, a minority in the country, still own a large share of the land, with people of Indian descent and mixed-race South Africans owning a smaller portion, and Black people the least.

Rigby felt guilt, sadness and shock seeing the conditions many Black people live in the townships. Roughly eight months into his trip, he faced danger for the first time. Rigby walked into a war zone in Mozambique, in southeastern Africa. He was near the Save River when he encountered flames engulfing cars, buses and buildings. Locals had warned him before he got there that there might be some trouble, but they said it wouldn’t be a big deal. As it turned out it was the wrong time to be there.

He approached a compound where government soldiers with AK-47s were stationed. The men pointed their weapons at Rigby and asked him where he was headed. After Rigby explained his mission he was directed to the officer in charge, who told Rigby he could proceed along his route by getting in a truck with eight soldiers. Two tanks were also deployed: one in front of the vehicle transporting Rigby, one behind.

That evening shots rang out. The truck stopped and everyone jumped out, but Rigby stayed inside at first. The soldiers returned fire while lying on the ground. Rigby was caught in a gun battle in which shots were coming from RENAMO, the Mozambican National Resistance, a military group and political organization representing the country’s largest opposition party.

Thinking that the truck he was in might become a target, Rigby jumped out and hid in the tall grass, bullets whizzing nearby. Rigby decided to shoot something of his own: video footage of the clash. When the rifle fire stopped, Rigby jumped back in the truck with the soldiers who drove him 150 kilometres to his destination.

It was a close call, but far from the last of the problems he confronted. In his next country, Malawi, Rigby kayaked 550 kilometres across Lake Malawi for two months, the most physically demanding thing he’s ever done.

Lake Malawi is the world’s ninth largest, with hippopotamuses, several species of birds, plants and crocodiles.

Rigby was able to borrow a kayak from two friendly travellers. At one point the kayak nearly sank with Rigby aboard.

While he paddled, Francesco, an Italian friend Rigby made in Mozambique, walked along near the shore for part of the journey to keep him company.

Rigby stopped at remote villages along the way to sleep and get supplies. Most of the villages were home to children who had never seen an outsider before, and certainly never a Black man speaking English so fluently.

He was usually greeted warmly, but in one village the situation went sideways.

After being met by a throng of people at shore, Rigby asked to speak with the chief, who later said Rigby could stay. But about an hour later two police officers showed up, pointed AK-47s in his tent and demanded Rigby produce a permit showing he could travel the lake in a kayak.

When Rigby said he didn’t require one, one of the officers said he didn’t believe Rigby was who he said — even though Rigby produced his passport. Rigby was handcuffed and driven by motorbike to a police station. He was held there for three days. Francesco went to police to vouch for his friend. Rigby was released and later got his kayak and other belongings returned at the village.

Following a short bout of malaria he contracted in Malawi — he was cared for at the Malawi-Tanzania border by nurses from Germany who were on vacation — Rigby travelled on his own to the island of Zanzibar in Tanzania for a vacation. He rented an apartment, unwound at the beach and hung out with locals.

The last leg of his journey took Rigby through Tanzania, Kenya, Ethiopia, Sudan and Egypt, where his highlights included Ethiopia, a country surrounded by the mountains and rolling hills of the Great Rift Valley, a geographical trench that stretches thousands of kilometres.

He hiked in the Simien Mountains in the Ethiopian Highlands, situated in the northern part of the country. “It’s so beautiful and green,” Rigby says.

In Ethiopia he experienced some surprises, including when he saw people feeding food to complete strangers on a bus. “They literally put it in your mouth with their hand,” he says. “It’s a sign of endearment.”

During his time in Africa he ate foods he’d never tried, including worms and crickets, insects that form part of the subsistence diets of some cultures.He ended his adventure in Giza, Egypt, near the end of February and flew back to Toronto via London.

All told he covered 95 per cent of his route walking, 4 per cent or so by kayak, and the remainder by ground transport, which included the escort from the Mozambican soldiers.

The African journey cost him $25,000 — which included his own money, some from his mother and her friends, and crowdfunded cash.

He plans to spend a month or so in Turks and Caicos, where he was born and where his parents live. He has started writing a book about his African journey. Then in the fall he plans to return to the continent for another adventure.He’s not saying which mode of transportation he’ll be using next time, except to say it will be “sustainable.’’

And he intends to keep challenging people to get out, be brave and see the world.